This signature quilt top has been christened the Sugar Creek Township quilt, after one of the block maker's home address.  As a top it has never been used or washed, so the colours are very bright.

It comes from Armstrong County, Pennsylvania and was made about 1942 - 1945.  I have researched a number of the names and made quite a few family connections. I haven't yet been able to get a good overall network for the quilt. The name on the central block - often the recipient of the quilt - is simply labeled 'Mother'. Another block, centre top row is another mystery - it just says, 'Mine'. Not enough information.

Today's block of interest is the following.  The pattern is Contrary Wife. 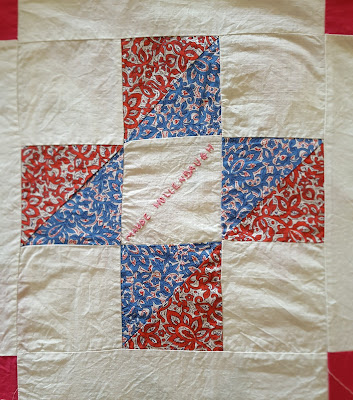 The name on the block is Maude Hollenbaugh.  I thought it might be interesting to see if Maude has a reason to choose Contrary Wife to represent herself.

Maude married farmer Frank when she was 19.  Maude and Frank had a large family of eight daughters and one son.  In the 1920 census all nine children were still living at home, from 20 year old Verna through to Margaret, age 1 year 6 months.  I imagine Maude was occasionally contrary.

Maude's sister Minnie also had the married surname of Hollenbaugh and I guessed that Maude and Minnie may have married brothers, not uncommon in a farming community with large families.  So I had a closer look at the census pages.  I was right, Minnie and John Hollenbaugh had the next door farm to Maude and Frank.  Minnie had three boys and a daughter, slightly older than Maude's brood but still all single at living at home.

Just on a chance, I went back a page in the census form.  Guess who was the neighbour on the other side?  Mrs. Fannie Brumbaugh, the maker of the remarkable Sailboat Oklahoma! 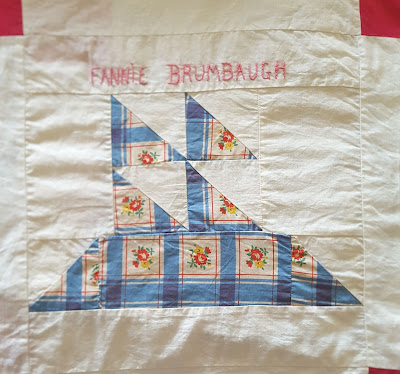 Quite exciting!  And back another page I found more names from the quilt.  The fascinating part of this discovery is that this was the 1920 census, twenty plus years before the quilt was made.  These women were building friendships while they were young wives and mothers and these same friendships endured for the rest of their lives.  I didn't find the connections in the 1940 census because the community had changed and the women had relocated as their circumstances changed. 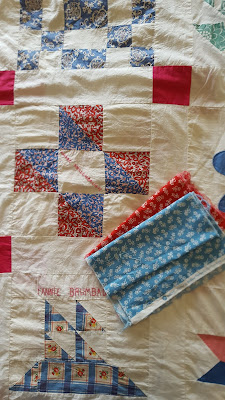 Time to make my own Contrary Wife.
Posted by Sharon~Two Bits Patches at 6:24 PM