As I've said before, I am a needleturn beginner.  My first two blocks, Jane Wilson's and Elizabeth Cowan's, were confidence building.  Needleturn isn't so hard after all!  I can do this!  My third block was this one. 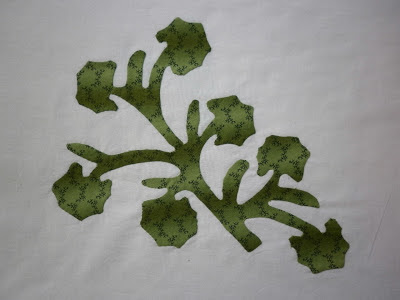 ﻿Those of you who are more experienced than I can guess at the difficulties I had.  There are points and turns and lots of little curves.  But that's OK, if we only did easy things we would never get better.  The leaves reminded me of nasturtium leaves, so I mentally called this block Crazy Nasturtiums.  It also reminded me of pressed flowers, arranged between the pages of a book so all the flowers and leaves are flat.

The original block is not one piece of fabric.  It was pieced from leftovers and includes a seam down the middle of one leaf.  It is all made from the same fabric however.  I thought about making the leaves separately from the stem, and made a second block. 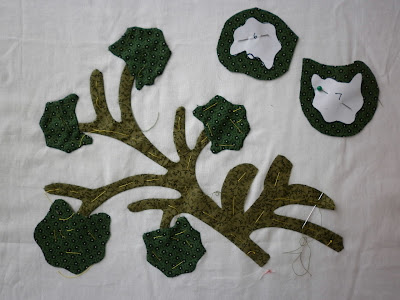 I printed the pattern twice and used one for the stem and the other for the leaves.  Don't forget to number the leaves before they are cut out.  It was still a fussy block to sew.  The corners on the leaves end up padded with the turned-under hem, but that makes the leaf more three dimensional.  I think I like this one better than the original.  ﻿

How are you going to make James' block?
Posted by Sharon~Two Bits Patches at 7:28 PM 2 comments:

Today I was playing with my set of block photos.  I have one set of photos of each of the original Chester Criswell quilt blocks which are in an album with a written description of the block maker and other interesting statistics.  I have a second set of photos which are loose, and I can spread them out according to pattern, family connections or whatever.  This morning I was using the photos to plan which patterns would be in The First Year and which ones would wait until the follow year/s.

This photo caught my eye.
﻿ ﻿It's not in good condition, the red fabric has deteriorated badly.  I don't think Lydia Baker was a family member.  Lydia was most likely a school friend of Mary Criswell - there are no Bakers in the genealogy and the block is in the outside row of the quilt, not close to the centre with family.
However, what struck me today was the shape of the applique.  It was both familiar and not familiar.  Scanning through the other photos I found its match.


It's the same patten as Block 2, Elizabeth Cowan's block.  The two outside arms of the leaf have been cut as part of the main block, and the inside of the leaf is a single piece.  The inside of the leaf shape branches differently but the outline is the same.  The finished effect is quite different.  I wonder if Lydia and Elizabeth were using the same source for a pattern.  Perhaps they had a one colour design and chose to make it with two colours.

Today was the first time I realised the two blocks are the same.  That's one of the reasons why I like this quilt so much.  Each time I look at it I find something new.﻿

Hey!  The blog has reached 12,000 hits this week, thank you for your clicks and comments.  How do we ever get our quilting done when blogland is so time consuming!
﻿ ﻿
I hope you have enjoyed Nancy's block.  If you have photos of the block on your blog you can add a link below to your post.  If you use Flickr you can add your photos there as well.


1. Write your blog post. Publish it on your blog.
2. Copy the link of the specific blog post. This is not just the link to your blog itself (www.chestercriswellquilt.blogspot.com), but the link to the specific post: (http://chestercriswellquilt.blogspot.com.au/2012/08/hows-it-going.html)
3. Click the blue link up button above and paste your link into the box.
Posted by Sharon~Two Bits Patches at 3:26 AM 3 comments:

Reds for the Stash

My stash of red fabric has grown considerably since I began this quilt.  Last week I travelled to Melbourne to do a spot of grandmother duty.  On the weekend I travelled in the opposite direction for a belated wedding anniversary weekend.  So, I was able to visit a few shops I rarely get to and I took the opportuntity to add to the red collection. 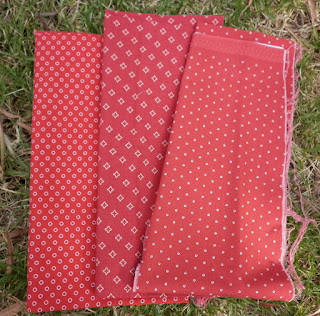 On the left is Dear Jane II by Brenda Papadakis from Windham Fabrics.  The middle is a Moda fabric, I think, and I don't know what is on the left (but it is a tinier circle than Dear Jane). 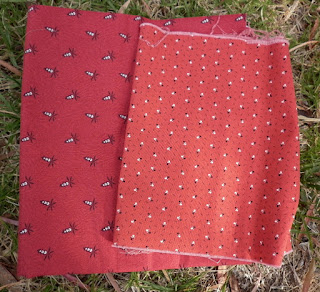 Peddlers Pack by Judy Roche and Corienne Kramer for Henry Glass fabrics; and another Windham fabric. 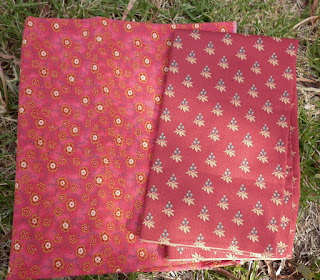 And finally a very pretty Dear Jane and one of Barbara Brackman's ﻿Battle Hymn. 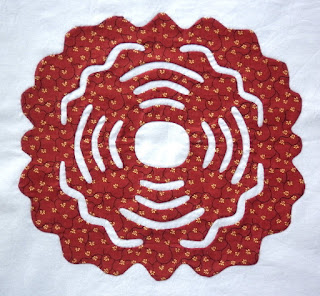 The fabric I used for Nancy Smith's block is one of my favourites.  The selvedge says Circa 1845 by Roberta Benoin for P&B Textiles.

Red is an excellent colour - especially with green. 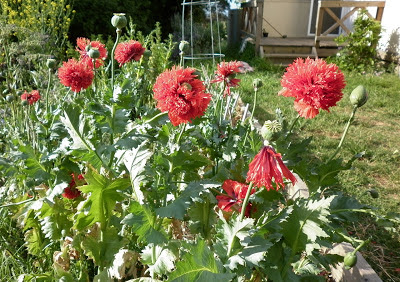 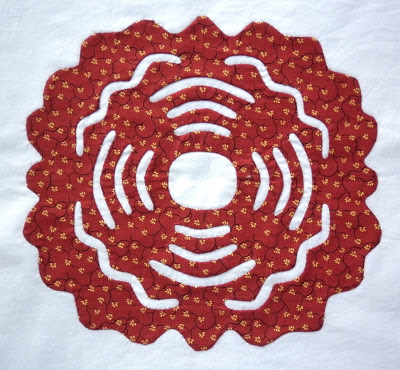 This month's block ﻿was made by Nancy Carlile Smith.  You can get a pattern for this block at Two Bits Patches. Nancy's mother Mary was a sister of Alice Criswell who made the quilt; so Nancy was a cousin of the bride Mary.  Nancy was married to James Smith and had three children when she made her quilt block.  Nancy had two more children and lived to the age of 68.

When I was drafting this block I was conscious of the irregularities in the applique. The ruffles around the outside aren't evenly spaced.  The reverse applique cutouts had a bit of a jag in the middle.  So, I redrew the outside line so the peaks and troughs were evenly spaced.  I considered doing a cut and paste in Photoshop to get the edge perfect.  The inside cutouts would benefit from a drawing compass, I thought, so that each semicircle was equal distance from the centre and from each other ....

I'm still in two minds as to whether I should have averaged those peaks and troughs.  Would it look better if it wasn't quite so .... undisciplined?


Have no fear of perfection - you'll never reach it.
Salvador Dali

I wish my stitching was perfect, nothing wrong with that.  However, I usually go for speed rather than perfection.  If I finish a seam and think, I should do that again, but don't; that's fine by me.  If I look at a seam three or four times and think it could be better then I do unpick and sew again.

How do you approach your sewing?  Is it the journey or the destination that gives you pleasure?  I'm certain there aren't wrong and right answers, just different answers. Are you going to even out Nancy's block?
Posted by Sharon~Two Bits Patches at 10:02 PM 5 comments: