Gussie Herr and the Quilting Church 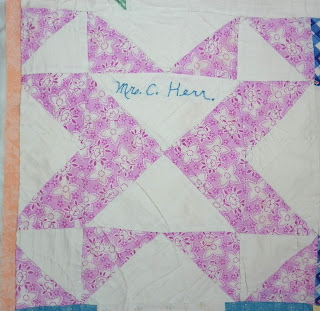 Gussie Herr worked as a seasonal worker in the fruit packing shed when it was harvest time.  Her husband Clemens was a farmer and cabinet maker, and their three children still lived at home; George was a timber worker, Elizabeth a stenographer and Marie was still at school.

Gussie was an active member of her church, the First Christian Church in Camas, Washington.  She had a long association with her church - Gussie lived to 103!  Her obituary reads, "She was very active in her church and was loved by all until the day the Lord took her home."  I found Gussie's obituary at one of the genealogists' favourite websites: www.findagrave.com.  Usually a hit brings up photos of tombstones, but this time there were photos of Gussie Herr herself.

Quilting was often a group activity in the first decades of the 20th century.  In remote communities the church and the quilting bee were the only opportunities for women to meet and socialize.  In the 1930s signature quilts were till popular as fundraisers for church building programs, or as a presentation to a retiring minister or Sunday school teacher.


Church fundraising quilt made by members of the
Grace Evangelical Lutheran Church,
Allentown, Pennsylvania. Dated between 1934 and 1937 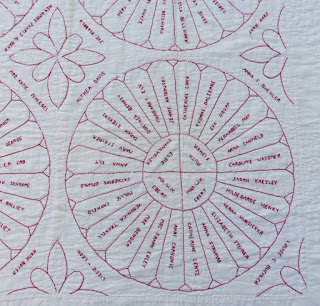 Detail of the Grace Evangelical quilt.  Individuals paid a small amount to have their name embroidered, and further funds were made when the quilt was raffled.


Some church associated groups earned funds by hand quilting tops made by others, the cost being calculated by the size of the quilt, the complexity of the pattern or the number of spools of thread used in the quilting.

Was the Malaga quilt a church project? It doesn't appear to be.  The quilt owner Lena Wallace was a member of the Malaga Christian Church, and the Malaga Homemakers were a church ladies group known for their quiltmaking activities. But the women in the Malaga quilt come from a number of different churches; one was married by a Catholic priest and yet another was Jewish.  Belonging to a church was important to many of the women, but they didn't all attend the same congregation.
Posted by Sharon~Two Bits Patches at 7:27 PM 1 comment:

Sorry for the delay in posting; the next participant in the 1937 Malaga quilt is Onie Mead.  Onie wasn't a farmer's wife like most of the other Malaga women.  Ray Mead was a school janitor until the Depression years, then he had some work as a laborer with the Works Progress Association. Onie and Ray weren't as well off as some of the other families. 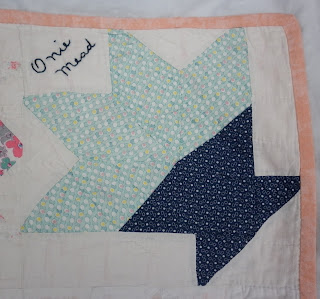 Onie made the same Cactus Basket black as Sarah Cannon.  So, I've chosen another basket block from the 1930s to show you. This orphan is from my collection: 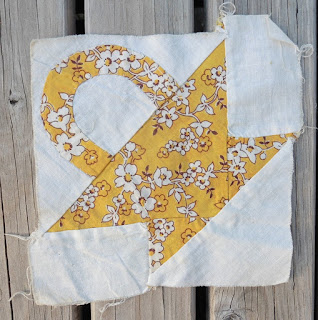 This block can be May Basket, Baby Basket or just Basket. I made a six inch one. 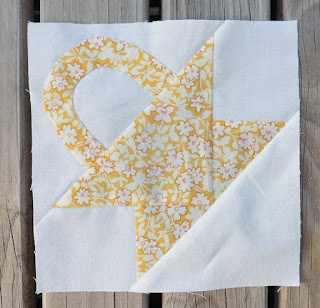 This Basket Block may look familiar even to non-quilters. 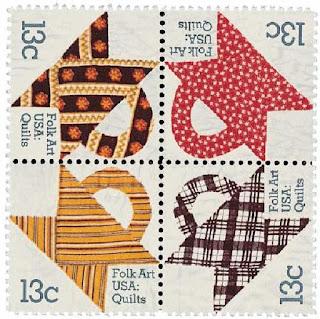 These stamps were released in 1978; and I imagine the next block was made about the same time.

If you were a patchworker in the USA during the Bi-Centennial, did you make blocks like this one?

Posted by Sharon~Two Bits Patches at 1:40 AM 2 comments: 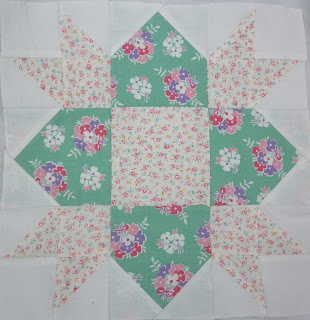 The block is a nine patch.  For a 9 inch block the centre is 3 inches.  The half square triangles in the corners finish at 1.5 inches.  Quilter's Cache has instructions for a 12 inch block. 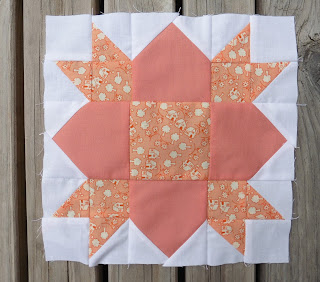 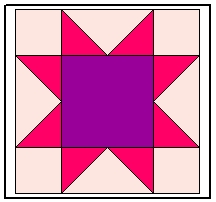 I went to an antiques fair last weekend.  Old quilts don't appear at antique fairs in Australia but I did find some postcards. 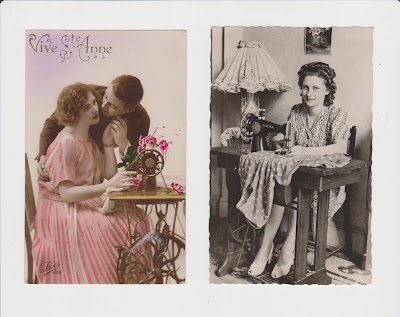 These French postcards are for St. Anne's day, the patron saint of seamstresses.  The messages - in French - on the cards are wishes for good health and good fortune.  The lady on the right is using her treadle with high heels, and the lady on the left is very distracted - can you see a lace garter hanging on the treadle stand?  These cards aren't rare, Google 'Saint Anne sewing machine postcards' and you will find dozens.  I found these ladies again but in different poses. 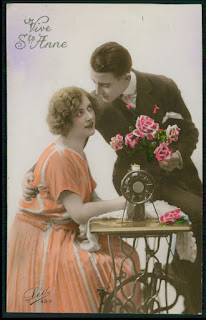 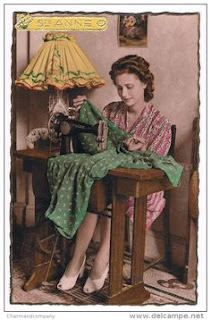 Do you have any St. Anne postcards?  Are they all French?  Would you send one to your mother?

Posted by Sharon~Two Bits Patches at 9:37 PM No comments: