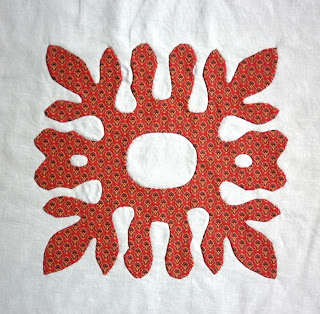 Have you finished Eliza's block?  We'd love to see a photo!


Posted by Sharon~Two Bits Patches at 1:37 AM No comments:

A Finish and a Winner

I finished my shirtings quilt in time for our patchwork group's biannual show.  I'm very pleased with it. 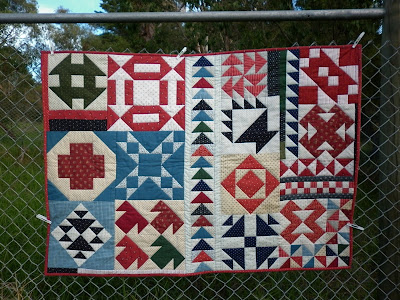 I had about seven quilts on display, this is another one of my favourites. 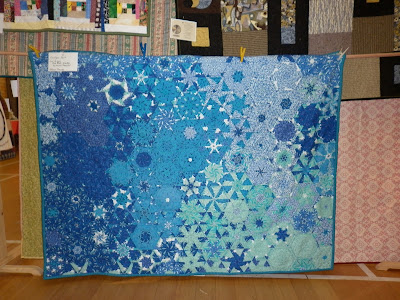 The pattern is from Maxine Rosenthal's book One-Block Wonders.  It took a bit of planning but was fun to make.

The giveaway has a winner!  It's Susan of www.sneedlemagic.blogspot.com .  Send me your snail mail Susan, and those fat quarters are on the way.

Block 10 is being prepared for release next week.  If you are signed up for The First Year you will see it in your inbox, otherwise you can check the website after May Day.
Posted by Sharon~Two Bits Patches at 3:03 AM 3 comments:

I was at the AQC last Friday.  It was my first visit and I enjoyed the venue and the quilts.  The Royal Exhibition Building is a magnificent Melbourne landmark. 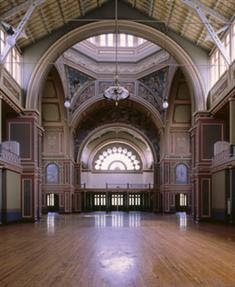 The quilts were superb, of course, and the shopping wasn't bad either <G>.  I bought my usual reds and greens. 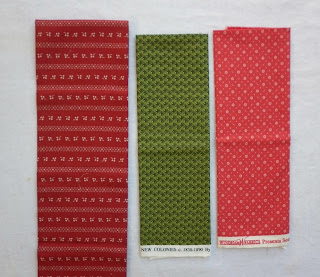 I also bought some 1930's prints for my next project. 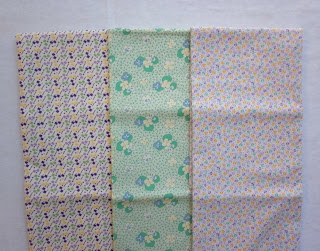 I also bought a bundle of beautiful  fabrics from the Pomegranate range by Blue Hill Fabrics.  No photo yet, I have to wait until Mothers' Day.

Even better than shopping was meeting Sue and Miriam and Sue-Ann at the show. They are all Chester Criswell Quilt followers and I am pleased they recognised me and said hello.  Miriam shares her CCCQ photos here quite regularly.

The Giveaway 25 is still open, you have until the evening of the 25th April to leave a comment.  Good luck!
Posted by Sharon~Two Bits Patches at 12:49 AM No comments:

Email ThisBlogThis!Share to TwitterShare to FacebookShare to Pinterest
Labels: AQC

I am pleased to announce that this blog has just received its 25,000 visit, and I've done twice twenty-five posts.  Hooray!

My online shop is called Two Bits Patches.  Two bits is a quarter, 25 cents, and I started selling fat quarters on eBay in 2007.


So it is very appropriate to have a fat quarter prize for this giveaway - three fat quarters in fact. 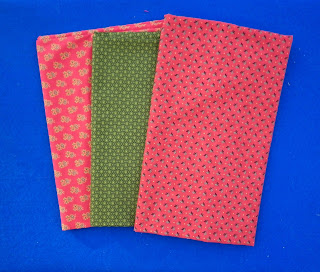 From left to right - Judie Rothermel's Quaker Quilts; Jo Morton's Lucinda's Needle; and Howard Marcus' Friendship: Collections for a Cause.  Just right for your next few blocks of the Chester Criswell Quilt.  If you are the winner, I will send you a fat quarter of each fabric.

To enter - post a comment on this post about what you are doing today, or what you wish you were doing today.  The winner will be chosen at random; if you link to this giveaway on your own blog you can have a second chance to win.  You may post a comment anonymously, but I can't get in touch with you if you win.  So I will choose someone else to win.

Closing date is 25 April.  In Australia that's ANZAC Day when we remember our involvement in the First World War.  In our family it's also my granddaughter's birthday.  I will spend the morning marching in two parades and then home to sew.

Posted by Sharon~Two Bits Patches at 4:46 AM 32 comments:

Swap Blocks Across the Seas

I got a special package in the mail last week.  I received a Royal Palm block. 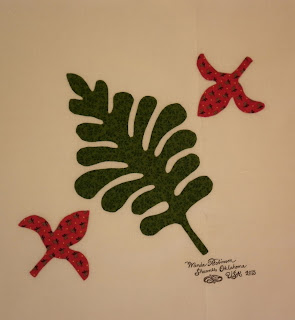 It's a swap block made by Wanda of Scrap Happy AKA Blended Quilter.  It's flown all the way from Oklahoma to Gippsland.  What's really special is Wanda's signature - she drew it freehand.  I'm impressed. 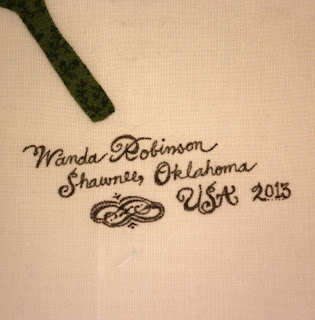 Of course, there's another block that flew from the Southern to the Northern Hemisphere. 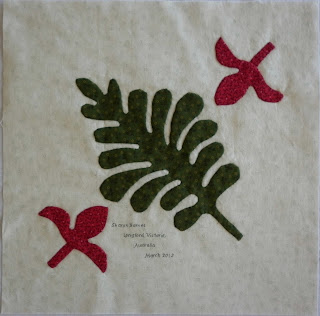 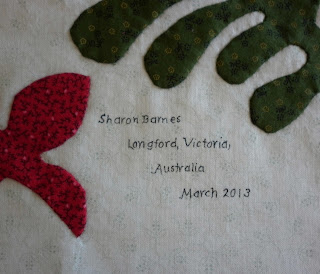 I signed my block, but I didn't trust my calligraphy abilities.  I traced my name. 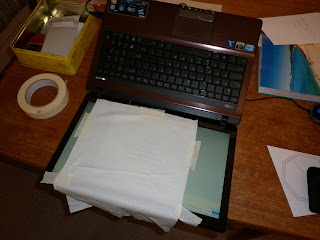 This is my light box.  I typed my words on the laptop, picked a nice font, then inverted the image.  After I turned the laptop around, the image was right side up again, ready to trace.  It wasn't quite as easy as it looks, but it did the job.  Different tools to Elizabeth Clendenen's inked stamps, but we both use the materials at hand.

Wanda and I are both pleased with our blocks, and we're ready to swap again.  Are there any takers?

A few people have said much how much they enjoyed Eliza's story, so I thought I would show you how her story took shape.

The 1850 Federal Census for Chester County is a good location for starters.  The quilt was made two years after the census and farming families didn't move much.  Eliza Whiteside was living  with Eli and Mary McKissick, whose names are on another block in the quilt.

Eli and Mary McKissick are in their 40's.  Eli McKissick, age 9, is their son; John Criswell, age 11, is a bit of a mystery person, and lastly is Eliza Whiteside.  At this stage I don't know how Eliza relates to the McKissicks.  The household is in Lower Oxford Township, and the previous page has the Criswells' details so I know the two families are neighbours.

Next I moved through the censuses for 1860, 1870 and 1880.  In the 1880 census I discover my next useful piece on information - Mary McKissick, widow, is the head of the household, and Eliza Whiteside is her niece.

There is a servant and two boarders living in the house, so Mary McKissick isn't wealthy. She is still living in Lower Oxford, most likely in the same house she moved to as a bride.  Eliza is aged 50 and still single.

After searching for Eliza's name and year of birth I found her baptismal record.

So the facts of Eliza's story are an illegitimate birth, living her whole life with aunt and uncle, being a neighbour to the Criswell family and remaining single.

The next fact was the Eliza's block in the quilt.  I am certain that the pattern was symmetric and the maker forgot to 'Measure twice and cut once'.  The maker went ahead and used the slightly unbalanced applique to make her block; the block wasn't rejected but was included in the quilt.

The next part of the story telling is the magic part.  I go through all the factual details, I get an image of the block in my head, and then I go away and do something else, usually weeding the garden.  As I keep busy with pulling up weeds the bits of information swirl around, assembling into a pattern and then dissolving again.   The characters develop personalities, not in great detail, but enough for me to imagine how they would behave and what they might think.

And that's how I write a story.

Posted by Sharon~Two Bits Patches at 4:58 AM 2 comments:

Eliza's block is up and ready for you to download here.  It's an interesting block, a bit of an ugly duckling perhaps.  (My brother has just looked over my shoulder at the screen and wonders if I'm sewing seaweed now.)
Only three blocks left to finish The First Year.  How time flies when you're having fun!

Posted by Sharon~Two Bits Patches at 2:27 AM 4 comments: