Noonday Lily - A Bit of a Challenge

I now have another McKim Sampler.  This one is just a top and I think the maker was a young girl who still was on a learning curve when it came it needlework.


It is a combination of pieced and applique, and there is a blanket stitch around the stem and leaves.  There are a few tucks in the block to get all the pieces together. 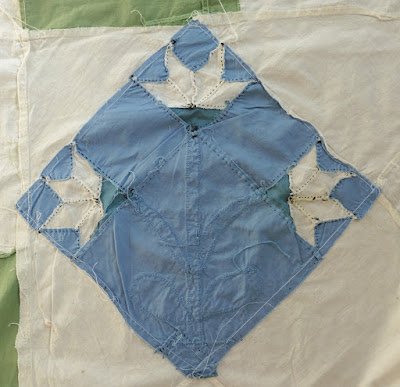 The block is hand pieced using black thread - even on the white lily flowers.  The finished quilt blocks are all machined together with a bobbin tension that was too tight. 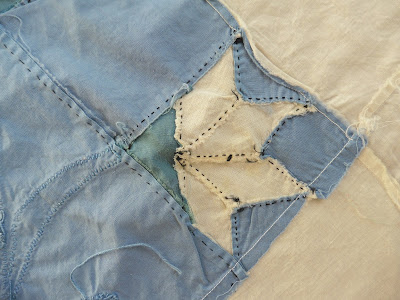 Then I noticed this detail on the front of the block. See that tiny triangle near the bottom of the block?  What happened here? 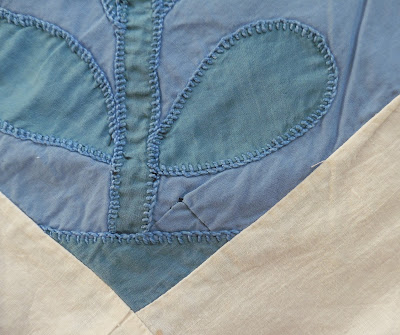 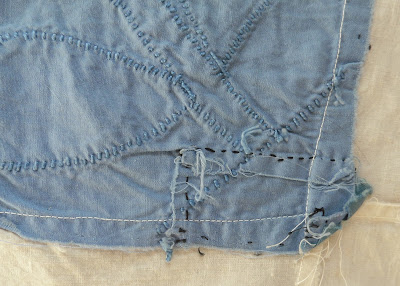 My guess is a slip of the scissors, and a quick patch was inserted to make things ... well, almost right again. The vague instructions printed in the newspaper didn't make the job any easier. 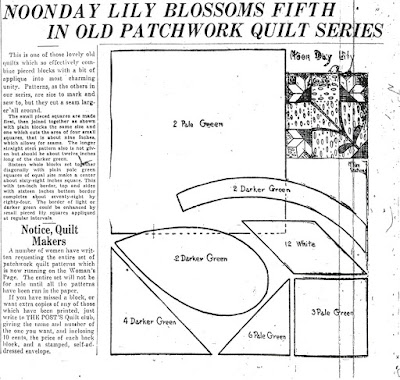 This is one of those lovely old quilts which so effectively combine pieced blocks with a bit of applique into most charming unity.  Patterns, as the others in our series, are size to mark and sew to, but they cut a seam larger all around.
The small pieced squares are made first, then joined together as shown with plain blocks the same size and one which cuts the area of four small squares, that is about nine inches, which allows for seams.  The longer straight stem pattern also is not given but should be about twelve inches long of the darker green.
Sixteen whole blocks set together diagonally with plain pale green squares of equal size make a center about sixty-eight inches square.  This with ten-inch border, top and sides with sixteen inches bottom border completes about seventy-eight by eighty-four.  The border of light or darker green could be enhanced by small pieced lily squares appliqued at regular intervals.
A number of women have written requesting the entire set of patchwork quilts patterns which is now running on the Woman's Page.  The entire set will not be for sale until all the patterns have been run in the paper.
If you have missed a block, or want extra copies of any of those which have been printed, just write to THE POST'S Quilt club, giving the name and number of the one you want, and inclosing 10 cents, the price of each back block, and a stamped, self-addressed envelope.
Posted by Sharon~Two Bits Patches at 10:14 PM