Godey's Design for Patchwork - with Instructions

I came across this picture from the 1861 Godey's Ladies' Book.  I saved it a number of years ago but I don't think I have ever shared it.  The instructions are the interesting part.  We are so used to having scanners and photocopiers and laser printers that we forget that our great-grandmothers had to draft their own patterns. 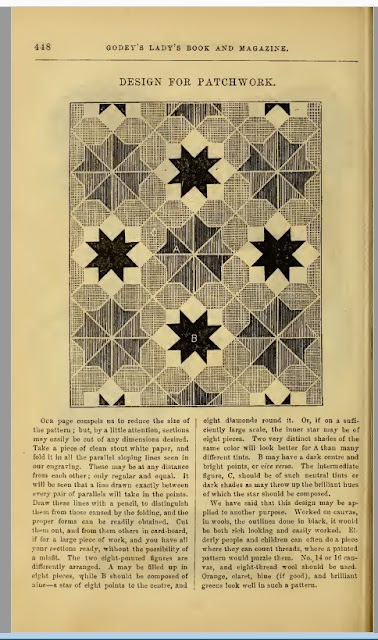 "Our page compels us to reduce the size of the pattern; but, by a little attention, sections may easily be cut of any dimensions desired.  Take a piece of clean stout white paper, and fold it in all the parallel sloping lines seen in our engraving.  These may be at any distance from each other; only regular and equal.

"It will be seen that a line drawn exactly between every pair of parallels will take in the points.  Draw these lines with a pencil, to distinguish them from those caused by the folding, and the proper forms can be readily obtained.  Cut them out, and from them others in card-board, if for a large piece of work and you have all your sections ready, without the possibility of a misfit.  The two eight-pointed figures are differently arranged.  A may be filled up in eight pieces, while B should be composed of nine - a star of eight points to the center, and eight diamonds round it.  Or, if on a sufficiently large scale, the inner star may be of eight pieces.  Two very distinct shades of the same color will look better for A than many different tints.  B may have a dark centre and bright points, or vice versa. The intermediate figure, C, should be of such neutral tints or dark shades as may throw up the brilliant hues of which the star should be composed.

"We have said that this design may be applied to another purpose.  Worked on canvas, in wools, the outlines done in black, it would be both rich looking and easily worked.  Elderly people and children can often do a piece where they can count threads, where a painted pattern would puzzle them.  No. 14 or 16 canvas, and eight-thread wool should be used.  Orange, claret, blue (if good), and brilliant greens look well in such a pattern."


So its a good pattern for elderly puzzled people?  I better keep it close at hand.
Posted by Sharon~Two Bits Patches at 12:51 AM