During the 1930s many of the patchwork pattern contributors became household names - Aunt Martha, Nancy Cabot, Grandma Dexter, Laura Wheeler, Nancy Page.  But many of these names did not belong to real people.  Some, like Nancy Cabot and Nancy Page, were aliases for the newspaper needlecraft editor.  Others, like Grandma Dexter, were just brand names and entirely fictional. 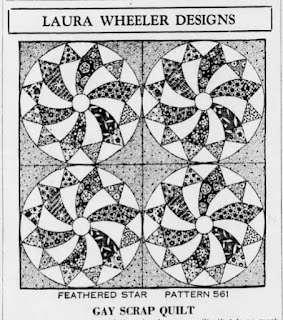 Laura Wheeler is, according to those who know these things, a fictional name and not a real person.  But recently I came across this newspaper article.  It was published on June 7, 1945 in The News Leader, Staunton, Virginia.  I have included the text of the entire article.  If Laura Wheeler was make believe, someone has gone to a bit of an effort to 'prove' that she did exist.  What do you think?  Let me know your opinion in the comments section. 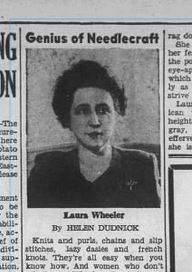 Knits and purls, chains and slip stitches, lazy daisies and French knots.  They’re all easy when you know how.  And women who don’t ask Laura Wheeler, the knit, crochet, and embroider genius.  An average of ten million women each year write to Laura Wheeler for instructions for knitting that baby bonnet they saw in yesterday’s newspaper.  She receives more mail than some of our top-ranking Betty Grables or Lana Turners.

Recently Laura Wheeler received a letter from a grandmother who wanted her to know that within a comparatively short period of time she had ordered seventy-two patchwork quilt patterns – all created by Miss Wheeler.  Grandma, as she signed herself, went on to say that she was making twelve quilts for each of her twelve granddaughter and that soon she could present the gifts to ‘her girls’ whom she knew would be delighted with them.

Laura Wheeler’s name is known to millions of newspaper readers.  She is discussed by countless women everyday – over back fences, notions counter and scores of other places where women and girls congregate.

In 1933, Laura Wheeler decided to close her own art studio and become the pioneer needlecraft designer in the field.

One day she asked of Goldsmith, “Why should we produce only dress patterns?  There are millions of women who like to knit, crochet and embroider.  Why can’t we manufacture needlecraft patterns for them?”

And so it was that Laura Wheeler gave birth to an idea which was to revolutionize the art of needlework.  She gathered a staff of skilled artists and designers who set to work under her direction, creating original designs for transfer patterns to be embroidered on guest towels, pillow case and doilies – patterns for many kinds of knitted garments – crochet patterns for centerpieces, fascinators, slippers or bootees.  She hired top-notch writers to describe step by step, clear and precise directions for each kind of stitch in a particular design.  As many as ten artists work on a single pattern.

Says Laura Wheeler, “When a reader sees my release in her newspaper and sends 15 cents for my needlecraft pattern, it is my job to see that not only will she get it promptly, but when the pattern does reach her, she can be assured that there will be no need to stop and question the next step.”  Added Miss Wheeler, “Every one of my needlecraft patterns is foolproof so that even a novice will have no difficulty finishing the sweater, purse or rag dolls she started.”

She stresses the practicability of her feature.  “I try to put myself in the position of a reader.  She wants eye-appealing needlecraft patterns which can be made as inexpensively as possible and that is what I strive to give her.”

Laura Wheeler is a typical American woman.  She is of medium height with black hair streaked with gray, sparkling dark eyes and an effervescent personality.  Laura feels she is amply repaid for her life’s work of creating needlecraft patterns when those millions of letters come pouring into her office – letters from women all over the country asking for more patterns, letters from grateful readers telling of the joys her designs have brought them.

When the war is over, Laura Wheeler plans to make her needlecraft pattern feature available not only in the United States, Canada and Australia but in other European countries as well.