This orphan block is made from a pattern simply called Turtle. 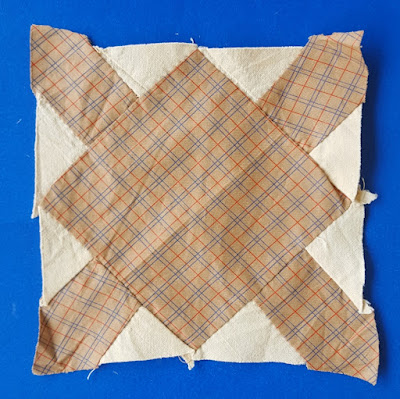 I'm guessing it was a challenge for the maker.  It is hand pieced with very neat stitches but the outcome isn't quite right.  The block doesn't sit flat and the triangles aren't quite large enough. There appears to be some machine stitching in the top pieces that has been removed; perhaps an attempt to square the block up.  Orphan blocks often look like this, they are the ones that could not be joined together with their friends. 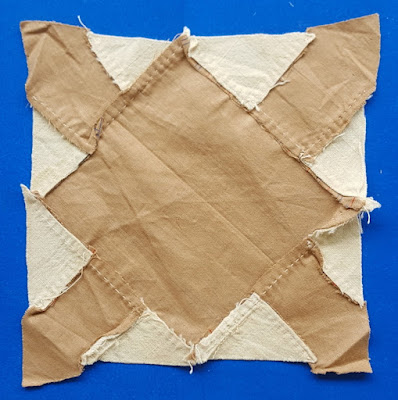 I have not found the Turtle in the reference books but I have found it in a newspaper.  It was published in The Daily Pantagraph, Bloomington, Illinois on Saturday, September 6, 1930.  Many of the newspapers that wanted to add a regular patchwork pattern opted for the syndicated designs by Nancy Cabot or Laura Wheeler.  But not the Daily Pantagraph.  They decided they could run their own series of patchwork designs and called on the local county home adviser Miss Clara R. Brian to supply the patterns.

Now if I was planning to introduce a series of patterns to entice the readers I would start with something special.  I would include an attractive sketch that would cry out, Make Me! But the Pantagraph editor knew better. 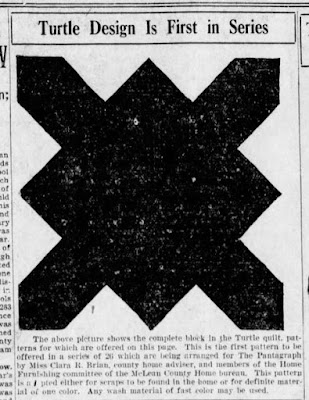 The above picture shows the complete block in the Turtle quilt, patterns for which are offered on this page.  This is the first pattern to be offered in a series of 26 which are being arranged for the Pantagraph by Miss Clara R. Brian, county home adviser, and members of the Home Furnishing committee of the McLean County Home bureau.  This pattern is adapted either for scraps to be found in the home or for definite material of one color.  Any wash material of fast color may be used. 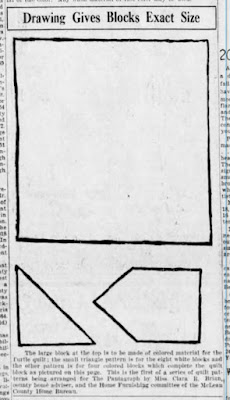 The large block at the top is to be made of colored material for the Turtle quilt; the small triangle pattern is for the eight white blocks and the other pattern is for four colored blocks which complete the quilt block as pictured on this page.  This is first of a series of quilt patterns being arranged for The Pantagraph by Miss Clara R. Brian, county home adviser, and the Home Furnishing committee of the McLean Count Home Bureau.

Hmm. Nice try but the Turtle didn't win the race this time.

Here is something new that I hope meets with approval.  I have added a new ebook to the Time Travel series in the Two Bits Patches Etsy shop.  This one is from 1930 and covers April, May and June. And because you have read right to the end of this post, I've got a 50% off coupon for this new ebook.  The code to enter is BLOGGER.