Whose quilt block? It's Mine

Yesterday I took a great stack of quilts to my Country Women's Association meeting to talk about antique quilts. It was great, I love talking about my collection and I got excellent feedback.  I showed a number of friendship quilts and explained how I track down the women who made each quilt block.

Some quiltmakers were very thoughtful, adding a full name, a location or even a date.  Other blocks remain a mystery.

This block is "Mine". It belongs to the Sugar Creek Township quilt top, made between 1942 and 1945 in Armstrong County, Pennsylvania.  Mine is in the centre top row so it may have been the person who organised the whole quilt.  Two rows down is the block "Mother."  My assumption is that Mother is the recepient of the quilt, and the two signatures have been done by the same person; the capital M's are the same.

I found an advertisement for a quilt pattern catalogue with the Hope of Hartford pattern.  This catalogue was published by the Farmers' Journal / Farmers' Wife magazine (1877 - 2015).  There was an annual quilt feature in either January or February.  This is from the February 1945 magazine, courtesy archive.com. The catalogue was 10c, patterns were 10c each or 3 for 25c.

Hope of Hartford - 12" pieced block.  The original is in pink, green and white.

Mine has chosen to stick to the suggested pink, green and white.  Interestingly, the design directly underneath the Hope of Hartford on the catalogue page is Twin Darts, also a block in the same quilt. Maybe the Sugar Creek Township quilt is closer to 1945 than to the earlier date of 1942.

Air Castle in the Sky

I am finishing a small quilt made entirely of traditional 9 patch blocks.  As my non-traditional computer lists the photos in alphabetical order, Air Castle is the one that heads the list. Air Castle was first offered as a pattern by the Ladies Art Company.  Nancy Cabot printed it in 1934. 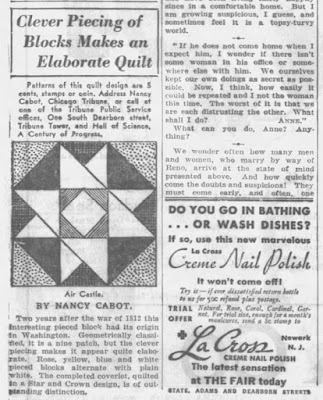 Two years after the war of 1812 this interesting pieced block had its origin in Washington.  Geometrically classified, it is a nine patch, but the clever piecing makes it appear quite elaborate.  Rose, yellow, blue and white pieced blocks alternate with plain white.  The completed coverlet, quilted in a Star and Crown design, is of outstanding distinction.

This Air Castles block is made with the colours suggested by Nancy Page.  Nancy Page must have been familiar with the other name for the pattern, Towers of Camelot.

P.S. I am always amused by the direction - No Seams Are Allowed. 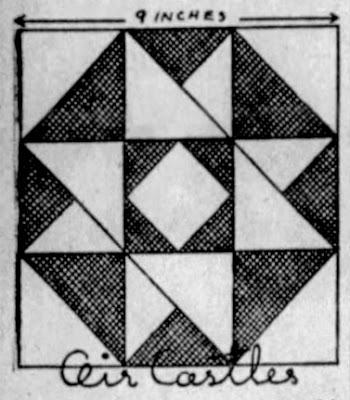 “If you make the castles white and have the surrounding hexagon in light blue you can imagine that you see your fairy turrets on your castle, silhouetted against the blue sky.

“I’ll grant you that I am stretching my imagination, and asking you to stretch yours, when I call the points turrets of the castle.  But you can get a glimmer, can’t you, of what I have in mind?”

The members of the Nancy Page Quilt Club said it was clear as crystal to them and that they thought it would be fun to make this quilt.

They clipped the picture and directions from the paper. They sent for the direction leaflet.  On this they found the tracing patterns for the various pieces.  After they had these they traced them onto light-wight cardboard.  Then they cut out the patterns and laid them on the goods. They traced the outline with a sharp pencil and cut out the pieces, allowing one-eighth inch beyond the pencilled line on all sides.

This has to be done since no seams are allowed in the pattern.

In sewing the pieces together, they sewed on the pencilled line.

This design may be worked out in numerous ways.  For instance, the blocks may be set together with alternate squares of background material.  They may be white or it may be the same shade of blue as is used for the octagon.  Or the blocks may be set together end to end and side to side.  This gives an all over design which is quite different in effect from that of the single block.

Or they put the pieced blocks together with sashing.

Since there are so many ways to set these together it is difficult to say just how much material will be used.  The pieces all have straight edges so there is little waste in cutting.  Nancy thinks that nine yards of material will made enough to make a top for a double bed.  The size of this quilt will be 90 inches by 106 inches.  The edges may be bound in blue or in white or the plain white border which can be added may be cut into points.  The center square may be of a different color than the triangles shown in white.

It has many possibilities as you can see.

The Colorado Quilt from the Kansas City Star

After twelve months of Nancy Cabot patchwork designs with exaggerated superlative descriptions it is a change to get back to the basics of the quilt blocks from the Kansas City Star. 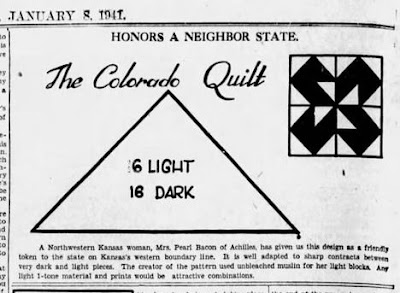 A Northwestern Kansas woman, Mrs. Pearl Bacon of Achilles, has given us this design as a friendly token to the state on Kansas's western boundary line.  It is well adapted to sharp contracts (contrast?) between very dark and light pieces.  The creator of the pattern used unbleached muslin for her light blocks.  Any light 1-tone material and prints would be attractive combinations.

I'm not a fan of half square triangles but they are extremely useful things.

Posted by Sharon~Two Bits Patches at 4:41 PM No comments:

At the start of 2020, my New Year resolution was to share a quilt block form the Kansas City Star each day on my Facebook page Two Bits Patches.  It was so much fun that I continued into 2021, this time sharing patterns from Nancy Cabot in the Chicago Tribune.  On Christmas Day in 1935 the quilt pattern was Sunbeam Crossroad.

What a cheerful name!  This is how it appeared in the Tribune 86 years ago.

One of the oldest of the middle western patterns is this delightful little pieced block with such a cheerful name.  "Sunbeam Crossroad" first was made in Ohio about 1854.  Blue and white formed the predominant note in the original pattern.  Blue prints with white figures and vice versa were used for some of the patches, while red, white, and dark blue were the plain materials included in the block.  The completed square measures 14 inches, and the entire quilt is composed of these pieced blocks.

My block is nine inches, and I had to use sunny colors, not blue and white. And that finishes 2021 in my sewing room.  And 2022?  Lots more newspaper patterns to come!