Wonders of a Patchwork Quilt - Montreal, 1932

The following is the memory of an anonymous writer of their grandmother's amazing quilt.  Published in the Montreal Star (Montreal, Quebec, Canada) on July 23, 1932 it describes an amazing gigantic bed-quilt full of family memories - for better or worse. 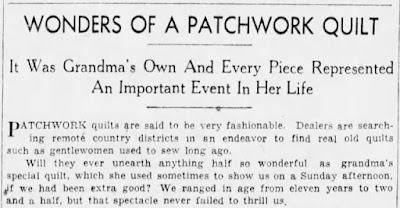 Patchwork quilts are said to be very fashionable.  Dealers are searching remote country districts in an endeavor to find real old quilt such as gentlewomen used to sew long ago.

Will they ever unearth anything half so wonderful as grandma’s special quilt, which she used sometimes to show us on a Sunday afternoon, if we had been extra good?  We ranged in age from eleven years to two and a half, but that spectacle never failed to thrill us.

There was a ritual about the very unpacking.  The quilt, being too wonderful to use, spent its life embalmed in a large drawer in grandmama’s bedroom.

First, dust sheets were taken off and folded, and moth balls fell to the floor.  Then many sheets of newspaper were unwrapped, as a friend had advised grandmama that moths could not abide the ink of the printing house.  Next were several layers of tissue paper of a lovely violet hue; we children used to try to abstract one or two unnoticed, while pretending to help.

How shall I describe the glories of the quilt itself when we feasted our eyes on it finally?  It would have been too large for a modern bed, but fitted the immense French bedstead favored by grandmama and grandpapa.

The underside was a dark red silk, with a generous frill of the material surrounding it.  The silk was fine, yet firm, and elongated diamonds of tiny stitches kept it attached to the wadding inside, which was not wadding at all, but eiderdown, collected by one of our great-uncles during a world tour.

The upper side consisted of a regular pattern of light flowers embedded in squares of monstrous brightness.  The geometrical flowers were made of folded narrow ribbon in the palest shades of pink, blue, dram and green.  It took grandmama a year to complete two flowers and their setting.  Looking back on the colors of that quilt, I can only think that she must have been born color blind, but we children reveled in its jarring tones.  Pale pink, violet, and pillar-box red struck us as delightful. Probably grandmama never regarded the colors as colors; to her each piece of stuff, dull or gay, represented an important event in her life.

EVERY PATCH A TALE

Sometimes she let us play a game.  One of us picked out a piece of stuff that took our fancy and she told us why it was there.  That small triangle of deep blue velvet decked with rosebuds was cut from Uncle Edward’s first walking frock, and the fact that he died at the age of four, beloved by all, gave the fragment a sentimental interest highly appreciated by his tiny nieces and nephews forty years later.

This handsome piece of violet brocade, worked with an exquisite pattern of hawthorn leaves was snipped from great-grandpapa’s fancy waistcoat, presented to him for heaven knows what by the B_____ Hunt.  It never occurred to any of us to ask grandmama why she spoilt an interesting garment simple to snip three inches off it for a spot of color on the quilt, nor do I suppose she could have told us if we had.

Three patches of cotton stuff, which might easily have been abstracted from a Union Jack, were a memorial to Albert and the twins, Caroline and Frederick.  They came to an untimely end at the seaside, where they untied a boat and put to sea, aged eight and five respectively.  Nothing has been heard of them since, and, as the currents there are notoriously dangerous and it is now 35 years ago, it is concluded that they were drowned.

Family tragedies, indeed, loom large in this quilt.  We all used to love a piece of golden brocade velvet in it, but only when I had grown up did I learn the reason why grandmama could never be persuaded to tell us the tale about it.  It was part of great-aunt Ann’s dance frock.  Aunt Ann was a beauty, and probably knew how well its yellow color suited her lovely complexion and velvet eyes.

Alas! Poor lady, she flirted with many good men but married a scoundrel, and died in dire poverty of ill-treatment, worry, and broken heart not two years later.  Grandpapa, incidentally, almost got imprisoned for life soon after for almost flogging to death the man who had treated his favorite sister so scurvily.

Uncle Tom’s Paisley snip of a tie is a brighter note, for he is still alive, a gay old bachelor of 78.  That tiny square of cream embroidery came from our mother’s christening robe.

Grandmama was always going to begin another quilt, to include dress remnants from our clothing and our father’s, but she never did.  Perhaps she remembered the fifteen years it had taken her to complete the other.